Sensei Vic’s Travel Report from the Laugaricio Gasshuku in Slovakia

I had the pleasure of joining Sensei Nakamura to teach at the Laugaricio Gasshuku in Slovakia. We arrived Thursday 8:30 am in Vienna, Austria and were picked up by Sensei Karol and a senior student. After a 2½ hour drive we were in the city of Trencin. Since the gasshuku didn’t begin until Friday evening, we had lots of time to explore. Trencin is an old city with a very large castle which I had the pleasure of touring with Sensei Marian.

The hotel that we stayed at was built in 1902 and recently modernized and is at the base of the castle cliff. The area was a Roman army station and they left behind an inscription carved in stone, which has been preserved in the hotel.

The gasshuku was well attended with about 80 teens/adults and 20 kids, the majority were black belts. Students from dojos in Slovakia, Poland, Germany, Czech Republic, Nepal and our own Sita and Felics from Denmark attended. The facility was large, with a gym and the dojo downstairs.

During the training I taught 2 kid’s classes for 90 minutes each. They were very eager to learn new games and to show their skills. We focused on basics and etiquette and I told them the story of the School of No Sword. Sensei Nakamura also taught a children’s class.

With the seniors we split classes by grade and rotated with a variety of training sessions. I focused on various san dan gi, speed drills and joint locks as well as solid basics. With the kyu belts I also talked of history and how it relates to kata. They all trained very hard and were open to trying new techniques.

A black belt grading was held on Saturday for 8 students and they all passed a rigorous test. That night at the Sayonara Dinner we awarded grading results and had an amazing feast of Slovakian foods at Koliba Restaurant on an island in the River Vah.

Slovakia is a beautiful country with a rich history. It has beautiful churches, rolling hills and mountains with small villages and green forests everywhere. We had an Octoberfest lunch in a small village, and in another saw the unique ‘Slovakian Bethlehem’, a large hand-made, animated display of carved wooden figures depicting early life in the area.

We also visited a village that was a museum of various buildings, with painted symbols on the outer walls, depicting life in the late 1800’s. We were then treated to a relaxing visit at the Aphrodite Spa for steam and mineral baths. A beautiful Greco/Roman location in the Low Tatras mountains. In the evening we joined 20 other students at the home of Tibor (who graded to Sandan) outside of Trencin. Here we had an amazing meal of deer goulash, smoked trout and fantastic pastries of all kinds made by his wife. The food and the wine just kept coming, which just demonstrates the hospitality of our hosts.

As this was my first international gasshuku, I was impressed by the organization of the events and pleased by the warm and welcoming reception of all the students. Thank you IOGKF Slovakia, Sensei Karol, Sensei Marian and all those involved for your memorable kindness and hospitality.

Victor Mangialardo
Sensei Vic joined IOGKF in Burlington at the age of 52 in 1993, the first year it opened in Canada. He currently holds the rank of Rokudan (6th degree black belt). Sensei Vic sees Goju Ryu as pure self-defence and always has an element of this in his adult classes.
Recent Posts
Contact Info
Shudokan on Facebook
Contact Us! 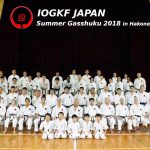 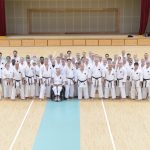