This year’s I.O.G.K.F. Friendship Tournament will take place on April 28th, 2018 at Haber Recreation Centre here in Burlington. Please come and cheer for all the competitors!

Our Goal for the Friendship Tournament

Vancouver 2010 Winter Olympics was a very exciting time for Canada.   Canadian athletes not only had their best performance ever but also broke a new record by any host country.  This outstanding effort resulted in 14 Gold, 7 Silver and 5 Bronze medals. Although these games had many memorable moments, the one that impressed me the most is that of Jaonnie Rochette.  The figure skater was able to overcome the most difficult situation any person has to endure, her mother’s death just 3 days before competition.  Joannie was able to control her emotions, concentrate and compete. After 2 days of competition she was awarded a Bronze Medal.  After the event, she answered to an American reporter and said that she had to shut down her emotions and focus at the moment.  In Martial arts training, this type of mental control is essential.  When you are attacked, you have to control yourself and find the best way to survive under pressure (fear).

Joannie demonstrated extreme high level of control.  Our friendship tournaments, although at a much smaller scale, is also one of my objectives for the event (as well as grading test).  I want my students / your children to feel this pressure.  To stand in front of a big audience, face their competitors and perform in front of the referees.  I want them to learn to perform their best of their abilities under this tremendous pressure.  I have learned to overcome my fears and shyness by participating in many tournaments.  As a sensei, my main objective for all junior karateka is not making them strong martial artists or to make them to carry traditional karate, but I want them to become better and stronger adults.  I want them to be well prepared when they grow up and go out in the real world.

The ability to control yourself and perform ones best under pressure is a very valuable ability to achieve.  When they grow up, this ability will help them in many different ways, such as job interviews, presentations, examination, and of course self defense situations.  Our organization used to participate in open tournaments with other styles.  Over the years, we noticed that much disrespectful behaviour was tolerated in the tournament not only from competitors or parents, but also from instructors and officials. So we decided not to bring our members to open tournaments.  “Respect” is the very important part of martial arts training; we can not bring our children to the place where there is no respect.  This is the reason why we started having our own tournament where we can control the environment by nurturing respect, honour, dignity, so children can compete in their own ability and they will be respected regardless if they win or lose.

I hope our members and parents understand the objective of this tournament, and allow your child to participate.  All participants will feel rewarded not only by receiving a medal but also by the cheering audience. 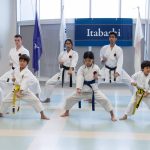