I preface this report with this: I am not European. I am from Canada. And although I would have expected to feel like an outsider because of this elsewhere, that was not the case here.

This year, the European Gasshuku was held in Prague, Czech Republic from July 24th – 28th and was hosted by Sensei Jaroslav Kulik and the CAOGK. However, my brother and I left Canada a few days beforehand and headed to Trenčín, Slovakia. We had met some of the members of SAOGK last year when they came to train in Canada with Sensei Nakamura, and Sensei Karol Krejčí, one of the chief instructors, very kindly asked me to teach a children’s class and train one night in his dojo. The training was fantastic and the kids worked very hard. When the weekend was over, we drove to Prague with some of the members of SAOGK who were also attending the gasshuku. 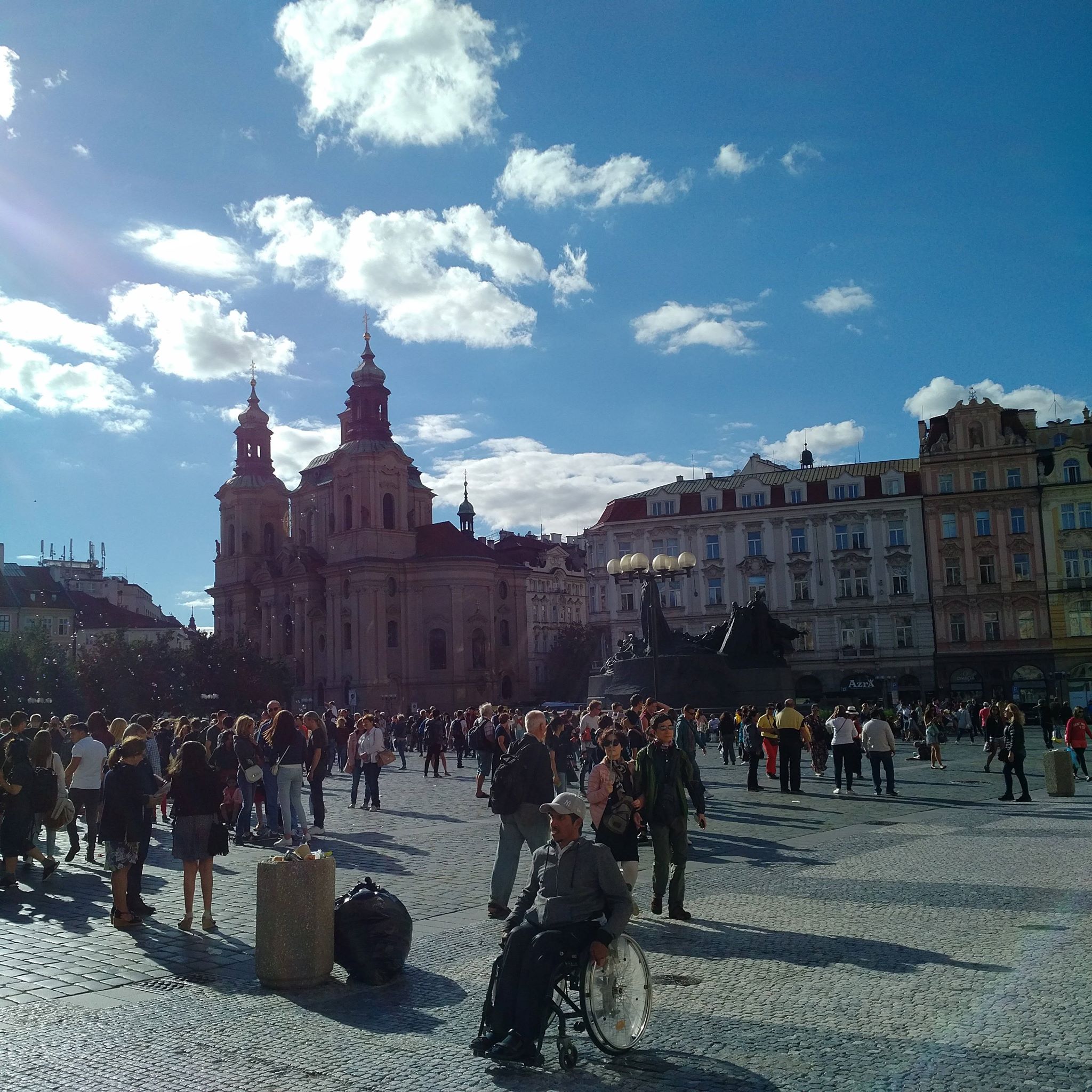 On the first day of the gasshuku, energies were high. One of the things that struck me the most was the number of people from different countries, including myself, who were reconnecting with friends from all over the globe. I myself got to see friends I had not seen in months or even years. The exchange of hugs, greetings, and stories were everywhere until the call came to line up. Once we had bowed in, Nakamura Sensei welcomed everyone before handing the floor to Bakkies Sensei. Bakkies Sensei reminded us that a gasshuku should be a very intensive seminar, the sole purpose of which is to improve a specific skill. As such, he said that everything that could make you lose focus from that purpose should be left behind for the week. It was both a reminder to train hard but with intent, and to keep our minds involved in what we were learning. With that, the training started. Sensei Nakamura led the warm up, after which we were split into groups by rank. 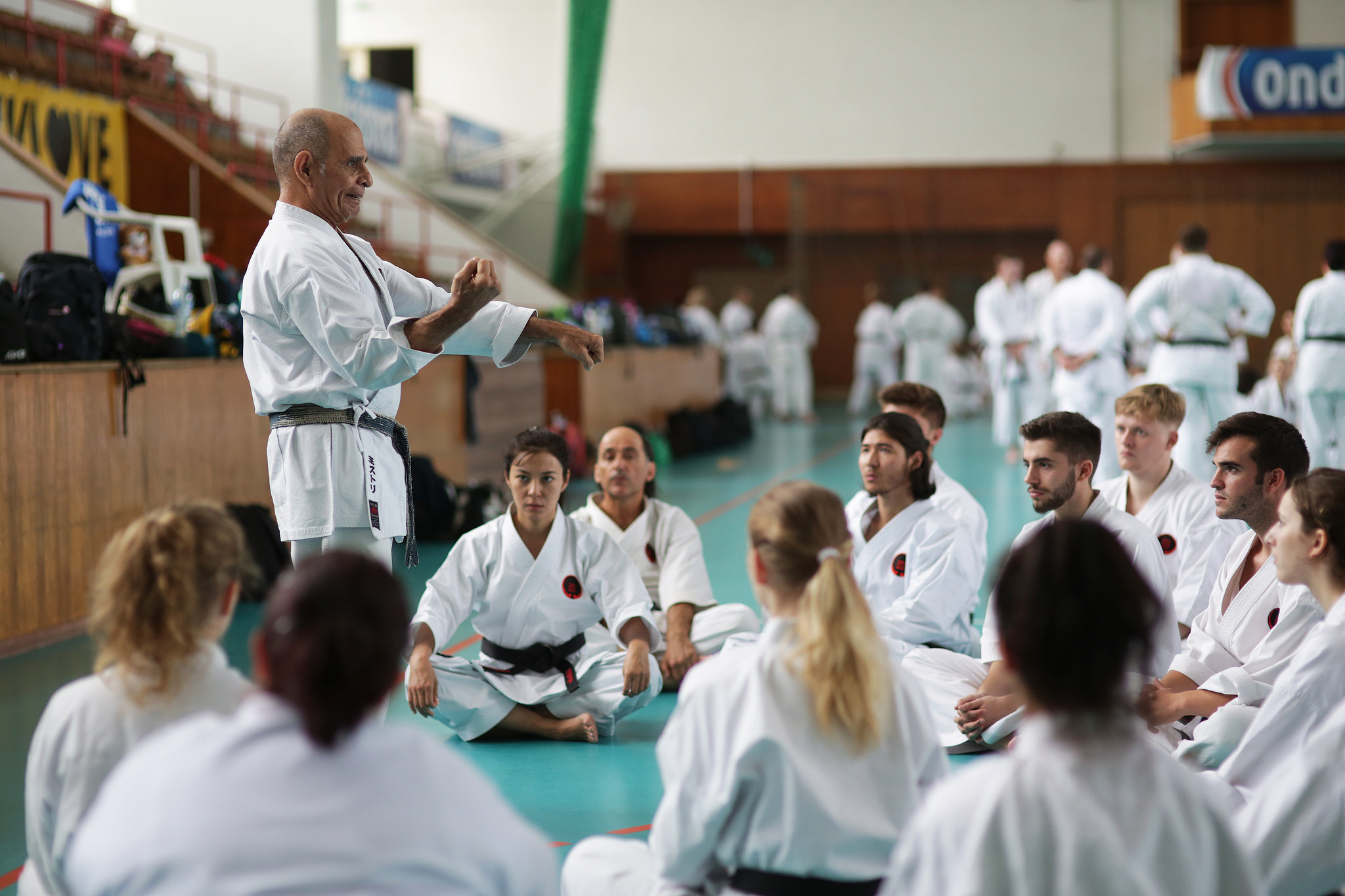 The instructors for the group sessions included World Chief Instructor Sensei Tetsuji Nakamura (Canada), Sensei Bakkies Laubscher (South Africa), Sensei George Andrews (England), Sensei Ernie Molyneux (England), Sensei Henrik Larsen (Denmark), Sensei Pervez Mistry (India, pictured above), Sensei Takashi Masuyama (Sweden), Sensei Roy Flatt (England), Sensei Luis Nunes (Spain), and Sensei Jorge Monteiro (Portugal). Sensei Linda Marchant, Sensei Paul Nolan, and Sensei Peter Galer (England) also taught the children’s sessions and special seminars. I can only speak for my half of the nidan group, but both the depth and breadth of the training was incredible. We covered many different subjects, from kakie to kata to kumite to bunkai, but each sensei spent a significant amount of time giving us valuable details on each technique and the reasoning behind it. Sensei George Andrews led a very interesting session on knife and self-defence that made use of goju techniques but with a mind to real street attacks. We also had some fascinating sessions which focused on Sanchin, Tensho, and Gekisai Dai Ichi and the permutations of their applications. On the final day of the gasshuku, Nakamura Sensei also made a point of gathering all the young people together, telling us that we are the next generation of IOGKF and that it is our responsibility to train properly to preserve the style. 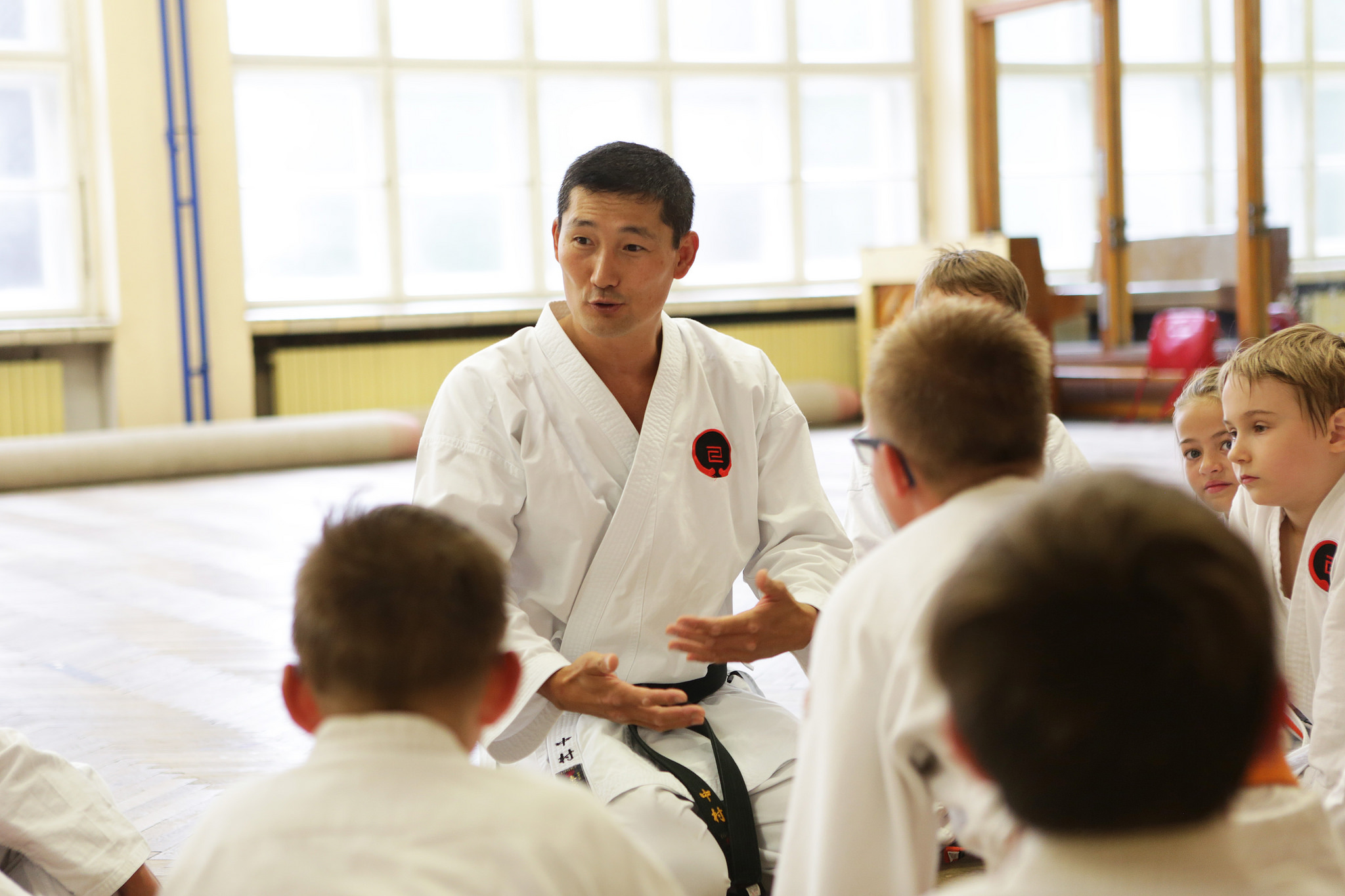 Though I unfortunately did not attend the kumite seminar taught by Sensei Paul Nolan and Sensei Peter Galer or the physiotherapy seminar led by Sensei Rendo Sugimoto, I was told that they were well-attended and thoroughly enjoyed by all of the participants. I did, however, participate in the women’s seminar taught by Sensei Linda Marchant. Before we started the training portion, Sensei Marchant said that the training for women and men should be the same, because we are the same in many respects – not all, but many. Thus we should not treat or be treated during training any differently. She also spoke of ikigai: the intersection of one’s passion, mission, vocation, and profession. Her words were inspiring and certainly gave all of us a lot to think about once the session was over. It was a fantastic seminar, with over two hours of good, hard training in blocking, strength and resistance, speed, and Sanchin.

As Nakamura Sensei says, it is important to work hard, but it is also important to take time to have fun, and that we did. The gasshuku was extremely well-organized, with lots of social events and activities spaced throughout the week. The welcome party was held in a lovely building in a park in the middle of Prague and though it was raining, everyone had a great time. It was also very interesting to hear some of the stories from the seniors about their senseis and when they started training. The tidbits of history gained were just as valuable as their teachings during training! The Sayonara party was also a great success if the lateness of the hour at which it ended was anything to go by. The hotel it was held in allowed everyone to walk around and talk to each other, and there was another area where people could go dance. Though slightly bittersweet since it signalled the end of a fantastic week, it was a great way to finish. The day after, my brother and I continued on to Germany and England, where we had the opportunity to train twice with Sensei Linda Marchant and meet several of her students.

One of the things that struck me the most about this gasshuku was how welcoming and friendly the atmosphere was. My brother and I decided to extend our trip beyond the European Gasshuku largely because of the people we knew. Everywhere we went, there was a group of IOGKF members ready to show us around, train, and make time for a cup of tea or a beer and good conversation. At the gasshuku itself, nobody seemed to feel left out. There was always an invitation, an open seat, or a training partner. And when our flight back to Canada was cancelled, we got many generous messages asking if we needed anything or a place to stay. Sensei Andrews reminded us during his seminar that the world is in a precarious position right now, being so fraught with divisive politics and hate – yet at this gasshuku, all I saw was tolerance and inclusivity. It was such a contrast to the stories that populate the news with increasing frequency. I think it speaks to the power of the IOGKF. The divisions of border, country, and politics are set aside when we come together to train because we understand that the IOGKF is not simply an organization. We are a family. 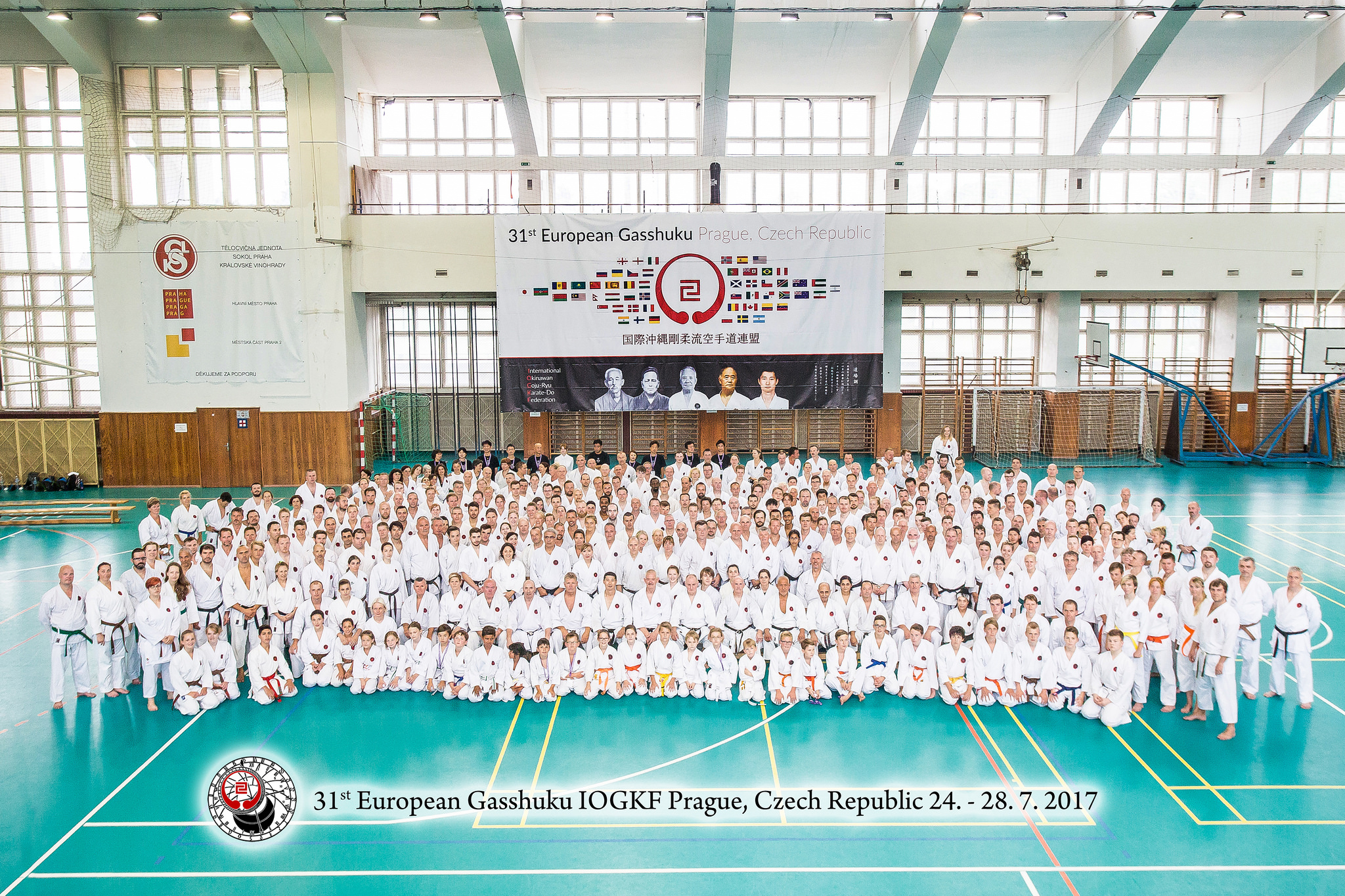 Sita Meenakshi
Sita Ganesan is a nidan at Shudokan Family Karate. She has been part of IOGKF Canada since she was six years old. She attended the European Gasshuku in Prague with her younger brother Jayant.
Recent Posts
Contact Info
Shudokan on Facebook
Contact Us!
0 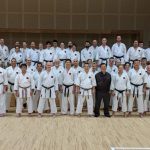