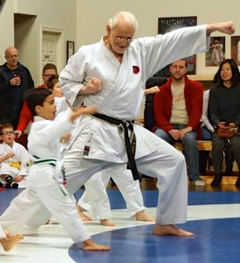 Sensei Vic joined IOGKF in Burlington at the age of 52 in 1993, the first year it opened in Canada, originally to relieve stress and get in better shape. He has stayed in the organization because of the people that he has met and the quality of the training.

He received his black belt in 1996 in Vancouver, and was graded by Morio Higaonna Sensei.

When teaching children he stresses the importance of good manners and always trying one’s best, encouraging self-confidence and personal growth. In adult classes he often isolates kata combinations and applications and shows how they can be easily applied in a real self-defence situation. Sensei Vic sees Goju Ryu as pure self-defence and always has an element of this in his adult classes.

He conducts seminars for women on Personal Safety and Self-Defence and makes it his goal to ensure that women feel safe and secure in all situations.

Time and injuries take their toll on the body and he has come to appreciate the meaning of the 4th Goju Ryu precept “act in accordance with time and change”.